Click on the title above to access the article, which ran this weekend in various editions of the Examiner.

On the Beach: High Tide at National Gallery

New colossal photography show - click link for review. And since the info box was deleted in some of the editions due to space, here is info about the venue and exhibition duration:

Richard Misrach: On the Beach
On view through September 1
National Gallery of Art, West Building (7th and Constitution, on the National Mall)
202.737.4215
http://www.nga.gov
Free

Email ThisBlogThis!Share to TwitterShare to FacebookShare to Pinterest
Labels: on the beach photography, Richard Misrach

The Lure of Lore

This hospitality industry and travel article is now available in the Spring 2008 print edition, and any minute now in the online edition, of HSMAI Marketing Review. Go to http://www.hsmai.org/marketingreview

Where your eggs come from

Click title link and see what really goes on

Beauty and the Beastly: TAXA 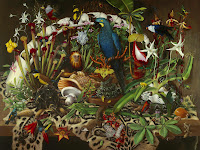 A must-see for art- and nature-lovers: TAXA, the new art show on view at the National Academy of Sciences building just west of the National Mall in downtown D.C.

Born in 1954, Isabella Kirkland grew up Richmond, VA. She attended Guilford College, Virginia Commonwealth University, and the San Francisco Art Institute. She was also, for a time, the only licensed female taxidermist in New York City. Research for her current cycle of work called TAXA takes her to natural history museums around the world. “Taxa”is a Greek word meaning "order" or "arrangement": taxonomy is the science of describing species and fitting them into proper evolutionary order on the tree of life.

To preview some of her works, go to http://www.isabellakirkland.com

Click link above for the article, which appeared Tuesday May 20 in various editions of the Examiner. Here's another edition:
http://bapaper.examiner.com/content/e-edition/2008/05/20/9/23.pdf

The Jacob Lawrence show at the Phillips Collection is at once a homecoming and a reunion. His Migration series has migrated in its entirety back to the Phillips, probably the first time in sixty-some-odd years all sixty panels have hung in the same room at the same time, since the Dupont Circle gallery hosted the original DC show – keeping the odd-numbered half of the panels for what even then was a pittance. Just one thousand dollars.

It’s an unbound picturebook of racial urbanization. Field workers making a dollar a day could double that wage in a Northern factory. (The price of exploitative hand labor is still two dollars a day one hundred years later.)

The hard journey – no interstates, no plumbing, yucky and dangerous.

These humble panels, yellowed paper, stickly frames, spare silhouettes emotionally convey the tenuous times of a century ago. Exchange Latinos for African Americans, multiply by ten, and you have today’s migration. The same tenuous existence, the same hundred years later.

Lawrence laid out all the paper panels and used a dark-to-light, paint-by-number, assembly-line process. He worked with inexpensive casein paints in a highly polished folk style: too expressive to be considered primitive; too informative to be cartoons. His palette is stark and basic. He says he likes paints “right out of the jar” and doesn’t mix colors.

Lawrence is one of the first art stars. He leveraged his work into a teaching career, and the embodiment of the Harlem-developed art, after his WWII Coast Guard stint. In the second room of the exhibit, a marvelous ten-minute video from 2000 shows Lawrence days before his death, verbally reinforcing the painterly basics of light, line, and color.

The Phillips Collection Education Department’s Migration/Jacob Lawrence Teaching Kit is simply super for any group. Lawrence’s emphasis on basic forms and colors is a perfect foundation for budding artists.

Concurrently, art from the Young Artists Exhibition Program will feature works by students age 6 to 16 that explore their own family history.

A free family festival will be held at the Phillips on June 7–8 with live jazz and theater, art activities, puppet shows, and poetry workshops.

Click link above for travel article. Photos in some editions, such as the Baltimore and other Maryland editions. See cover at
http://bapaper.examiner.com/content/e-edition/2008/05/17/8/01.pdf 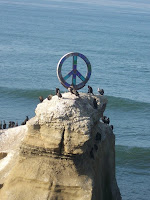 Great and important book about the beauty, loss and possibilities of recovering the magnificent animals - wildebeests to bison, songbirds to sandhill cranes, salmon to right whales - who once massed for amazing migrations across land, sea and sky.

Muraqqa Mughal Art: Get out the magnifying glass

Overdrawn at the Bank of Love?

Bank of Love: Are You Overdrawn? In various editions of the Examiner newspapers. Click the link to access article.

Art Oasis in the Desert

Both Hands Blazing: The Unsung Architect of the Look of America

Smart New Cool Tool for Those Who Eat Fish

How Food Choices Affect the Environment

A couple of the good articles from last week's New York Times Magazine. Go to nytimes.com to read their Green issue.

THE HIGH PRICE OF BEEF: Late in February, the governors of Maine, Rhode Island, Washington, Maryland and other states received letters from Lindsay Rajt of People for the Ethical Treatment of Animals, asking them to encourage the citizens of their states to become vegetarians. The governors of those states have been fighting for tighter vehicle-emissions standards as a way to combat climate change. That made them a target for the folks at PETA, who argue that the climate impact of the car pales in comparison to that of the cow. A 2006 report by the United Nations Food and Agriculture Organization found that livestock production accounts for 18 percent of the world’s greenhouse-gas emissions — more than all forms of transportation combined. Meat’s supersize impact comes from fuel- and fertilizer-intensive agricultural methods of growing feed, all the power needed to run slaughterhouses and meat-processing plants and the potent greenhouse gases produced by decomposing manure. Pork, lamb and poultry all have their impacts, but beef is undoubtedly the Hummer of the dinner plate. Sixty percent of the deforestation in the Amazon River basin between 2000 and 2005 can be attributed to cattle ranching; much of the remainder was cleared to raise corn and soy for feed. And cows, once fed, burp — a lot. Each day, a single cow can burp as much as 130 gallons of methane, a greenhouse gas that traps more than 20 times more heat per ton than carbon dioxide. Trimming the amount of meat Americans eat would not only help the planet — a mere 20 percent reduction is the equivalent of switching from a Camry to a Prius — but would also be likely to reduce obesity, cancer and heart disease. Until recently, it was only animal rights groups like PETA that were willing to ask Americans to forgo the pleasures of the flesh. That changed in January, when Rajendra Pachauri, the head of the Intergovernmental Panel on Climate Change (and a vegetarian), uttered four little words: “Please eat less meat.” He continued: “This is something that the I.P.C.C. was afraid to say earlier, but now we have said it.” DASHKA SLATER

IS LOCAL ALWAYS BETTER?: From start to finish — from planting seeds to disposing scraps — the food sector accounts for roughly 25 percent of an American’s ecological footprint, according to Susan Burns, a managing director at the Global Footprint Network in Oakland, Calif. “Choices about what to eat have about the same impact, environmentally, as choices about how to drive or transport ourselves,” she says. The average supermarket product travels 1,500 miles to reach the shelf, but Burns concedes that, from a carbon perspective, it can be confusing being green. There’s no one accurate carbon footprint calculator for foods, yet. “To give specific numbers between an apple trucked from Washington State to Massachusetts and a papaya shipped to the grocery store,” Burns says, “you’d have to know everything from the fuel efficiency of the truck to the kind of fertilizer that was used, to the kind of ship the papaya was shipped on.” It is the locavore’s dilemma that organic bananas delivered by a fuel-efficient boat may be responsible for less energy use than highly fertilized, nonorganic potatoes trucked from a hundred miles away. Even locally grown, organic greenhouse tomatoes can consume 20 percent more resources than a tomato from a far-off warm climate, because of all the energy needed to run the greenhouse. Various organizations like the British grocery chain Tesco and the Global Footprint Network itself are trying to design accurate calculators both for carbon outputs and for general ecological impact. But not having them is no reason not to act. Burns recommends the following steps. First, break the packaging habit: “It’s not uncommon for food packaging to use more energy in production than the food it contains,” she says. Next, make it a goal to eat foods that are at once organic, local, seasonal and low on the food chain. Local keeps down the transportation miles. Organic eliminates the high energy costs of pesticides and fertilizers. Seasonal foods do not need greenhouses or long periods of refrigeration. And she notes that the food chain matters, carbon-wise: the CO2 impact of a pound of beef can be 250 times as great as that of a pound of carrots. (Of course, even the most sustainably raised legume racks up carbon points in an inefficient refrigerator.) Lastly, some of the most troublesome aspects of the food cycle occur in disposal. Rotting food is itself an ecological concern, because methane, a byproduct and a greenhouse gas, has an enormous impact on global warming. “Compost and advocate for compost,” she says.