Check out this program that helps soldiers and their companion animals.

Run for the money, many are disposed as if trash. Good sports article here.

Cooking 101 for the young and hungry

Robin's piece about Freshman in the Kitchen author Max Sussman, who is sous chef at Ann Arbor's hot restaurant named eve (yes, lower case). The article's in the Examiner print and web newspapers...here's one edition.

Recycling debris into music instruments - Robin's article in various editions of the Examiner. Here's one.

Good concise article addressing myths and realities about health care and insurance in the U.S. and worldwide.

Good piece about former dogfighters and others happily enlightened.

The U.S. agricultural industry can now produce unlimited quantities of meat and grains at remarkably cheap prices. But it does so at a high cost to the environment, animals and humans. Read the article here. By the way, most animal agriculture takes place in horrid factory-like conditions, not like the farm shown in this photo.

Facts and figures on the high cost of our throwaway economy here.

Ann Arbor's a prime spot for veg and beer lovers. Good music, too. Read on...

Farm Sanctuary: saved from the slaughterhouse

"Rescued from slaughterhouses, stockyards and other “food animal” production facilities, these creatures find themselves in a bucolic idyll run by vegan activists.... They are more interested in improving the appalling conditions under which animals become food." Good folks running an interesting alternative farm - read on.

In "American Gospel: On Family, History, and the Kingdom of God," Erik Reece offers a more sensible interpretation of scripture, one that compels acting like Jesus on earth instead of banking on a free ticket to heaven. From another review: "Reece, author of the award-winning Lost Mountain, is the son and grandson of Baptist preachers. His own religious world-view, however, comes not from traditional Protestant Christianity, but from American thinkers such as Walt Whitman, Thomas Jefferson, William James and the lesser-known scientist Lynn Margulis.... He is searching for a form of Christianity that he can live with, since he believes that the usual sources are unhelpfully dogmatic. The primary tension is a classic one: the struggle between the material and spiritual worlds...." Details here.

Babies smarter than you think

Babies are smarter than you think - evidence here.

Email ThisBlogThis!Share to TwitterShare to FacebookShare to Pinterest
Labels: babies smarter than you think, baby intelligence

We discovered this resource at the American Chemical Society's national conference. Bytesize Science was conceived for smart kids, but adults will be able to understand it too. Dogs' companionship, super-floating boats, paper stronger than iron...podcasts and vids about energy and other science topics. Check it out here.

Email ThisBlogThis!Share to TwitterShare to FacebookShare to Pinterest
Labels: bytesize science, science for kids, science for the layman

Thought-provoking Newsweek article on animal casualties from new energy technologies and ways to reduce the carnage. Companies and govt can take more steps to protect wildlife and ecosystems...and each individual can help by trying to reduce their energy consumption (which will save you money too). Article here.

If you want to live longer -- avoid heart disease, Alzheimer's disease and cancer -- then pick and choose your foods with care to quiet down parts of your immune system. Meaning mostly plant-based foods. LA Times story here: http://www.latimes.com/features/health/la-he-anti-inflammation17-2009aug17,0,3196484.story 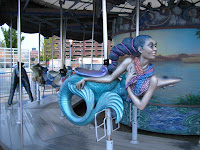 Do chips taste better when an ad describes their crunch? Is popcorn more flavorful if its aroma is featured in an ad? Yes, says U of Michigan researchers with a tasty assignment. They report that multisensory advertising - ads that describe taste, smell, texture, sight and sound - enhance consumers' taste perception. Why? Because taste is generated from multiple senses.

Force-based corrections are popular because they can yield instant results. But most often, the instant results are confusion, a temporary end to the behavior, possible fear-based aggression, and fear of your approach. In her Your Dog article, "Teach Instead of Correct," Pat Miller offers expert guidance, including some of the tips noted here.

Same song, 2 videos. One from Happy Tails Rescue; the other features the Eugene, OR singer/sw John Shipe. 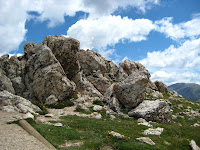 Off grid with goats at Funky Butte

"I've spent the past three years trying to get petroleum out of my life and live locally. Where I differ from many locavore cruncholas is in my determination to do these things without giving up digital-age comforts..." More here. And here. From this funny smart guy's blog: " For most of human history, this poop-to-pasture method of fertilizing worked just great for everyone. I wonder who the first farmer was who said, “Hey, lay some of those carcinogenic chemicals on me. That sounds like a good plan”? My guess it had something to do with a skilled carcinogenic chemical salesman offering free samples."

Email ThisBlogThis!Share to TwitterShare to FacebookShare to Pinterest
Labels: doug fine, living off the grid, off grid, sustainable life

Healthier, humane meat from the lab

A pioneering group of scientists are working to grow real animal protein in the laboratory, which they not only claim is better for animal welfare, but actually healthier, both for people and the planet. It may sound like science fiction, but this technology to create in-vitro meat could be changing global diets within ten years.

Please shop with compassion: dollars are votes; vote vs. cruelty

Slaughter of factory farm animals is not humane. If you won't go veg, please buy only from sources that treat and slaughter humanely.

Dogs at least as smart as 2-year-old children

Dogs can count. They can also understand more than 150 words and intentionally deceive other dogs and people to get treats, according to psychologist Stanley Coren, PhD, of the University of British Columbia. He spoke Saturday on “How Dogs Think” at the American Psychological Association’s annual convention.
Coren has reviewed numerous studies to conclude that dogs have the ability to solve complex problems and are more like humans and other higher primates than previously assumed. He says dogs’ mental abilities are close to a human child age 2.5 years.
The intelligence of various types of dogs does differ and the dog’s breed determines some of these differences, Coren says. “There are three types of dog intelligence: instinctive (what the dog is bred to do), adaptive (how well the dog learns from his environment to solve problems) and working and obedience (the equivalent of ‘school learning’).”
Data from 208 dog obedience judges from the United States and Canada showed the differences in working and obedience intelligence of dog breeds, according to Coren. “Border collies are number one; poodles are second, followed by German shepherds. Fourth on the list is golden retrievers; fifth, dobermans; sixth, Shetland sheepdogs; and finally, Labrador retrievers,” said Coren.
As for language, the average dog can learn 165 words, including signals, and the “super dogs” can learn 250 words. “The upper limit of dogs’ ability to learn language is partly based on a study of a border collie named Rico who showed knowledge of 200 spoken words and demonstrated ’fast-track learning,’ which scientists believed to be found only in humans and language learning apes,” Coren said.
Dogs can also count up to four or five, said Coren. And they have a basic understanding of arithmetic and will notice errors in simple computations, such as 1+1=1 or 1+1=3.
Four studies he examined looked how dogs solve spatial problems by modeling human or other dogs’ behavior using a barrier type problem. Through observation, Coren said, dogs can learn the location of valued items (treats), better routes in the environment (the fastest way to a favorite chair), how to operate mechanisms (such as latches and simple machines) and the meaning of words and symbolic concepts (by listening to people speak and watching their actions).