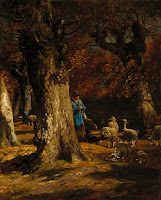 In the Forest of Fontainebleau: Painters and Photographers from Corot to Monet

Prior to Yellowstone being designated America’s first national park, preservation-minded folks successfully lobbied for converting an age-old hunting ground of kings into the world’s first nature preserve in 1861. The Forest of Fontainebleau’s 19th century tourist draw included artists from within and beyond France. Finding it the perfect setting for open air, or plein-air, painting, many stayed. Those engaged in the new art of photography embraced the wealth of subjects on scales grand and small. The flora and fauna inspired some to cross genres, which typically involved quite an investment in tools and materials. New growth took root in the forest – specifically, the Barbizon School.

The enchanting pictorial journey highlights painters Jean-Baptiste-Camille Corot and Théodore Rousseau, and photographer Eugène Cuvelier. In this dense forest, Claude Monet is outclassed; in other landscapes he would achieve global name-brand fame for his impressionist reveries.

Some beautiful glimpses of work by Jean-François Millet can be seen in this forest. Look for The Shepherdess, Millet’s pastel and black conté crayon study on paper that magically reveals the artist’s process of composing elements and colors.

But within the lush confines of the Forest of Fontainebeau, take the opportunity to discover the lesser-knowns. Particularly, Millet’s friend, Charles-Emile Jacque.

Jacque (1813-1894) had a humble start as an engraver’s apprentice, honing his dry point skills while rendering maps. Next, on to military service, where he sketched and eventually worked to catch the eye of tastemakers in Paris. He worked on woodcut illustrations for Shakespearean texts in London before coming home to France, where he developed a passion for rural landscapes.

Jacque’s exquisite sensitivity enlivens his depictions of daily life of farmers, shepherds, and their animals. These gentle, pastoral scenes are outshouted by larger, more dramatically rendered pieces from more famous peers. But Jacque humbly offers most precious gems – look at the texture and heft of his sheep, and even more impressively, their expressions.

This unsung master’s The Old Forest and The Departure of the Flock are two of the most affecting works of the 100-plus in this show. I left with the image pleasurably seated on my mind of a sheep, neck turned, gazing back – as if the gentle creature sensed being watched by a person who appreciated the animals as sentient, living beings instead of commodities for profit.